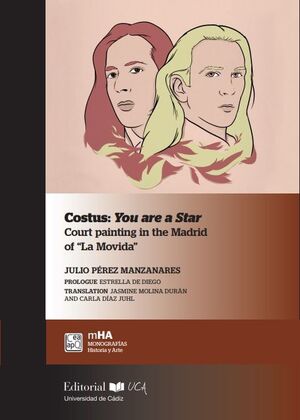 COSTUS: YOU ARE A STAR. COURT PAINTING IN THE MADRID OF «LA MOVIDA» (Libro en papel)

Costus: You are a Star is the artistic biography of the Costus duo of Enrique Naya Igueravide (Cadiz, 12th September 1953?-?Badalona, 4th May 1989) and Juan Carrero Galofré (Palma de Mallorca, 3rd February 1955?-?Sitges, 3rd June 1989). Two artists clearly linked to the pop and neo- gurative art movements of the Eighties and linked to what would later be known as the Movida Madrileña.

Their biography is made almost mythical due to the gatherings of artists and key personalities of the time, such as Alaska and the Pegamoides, Pedro Almodóvar, Guillermo Pérez Villalta, Fabio McNamara or Tino Casal at their Calle Palma house. This biography is given historical and critical context in this work, analysing their creations and the role that they played as the re ection of a historical moment within Spain. This work is written by the History of Art specialist Julio Pérez Manzanares. It is a critical review of the mysti ed Movida in Madrid as a historical and national identity-de ning period, seen through the artists' works, the real embodiment of pop, kitsch and camp in the Spain of the Transition.