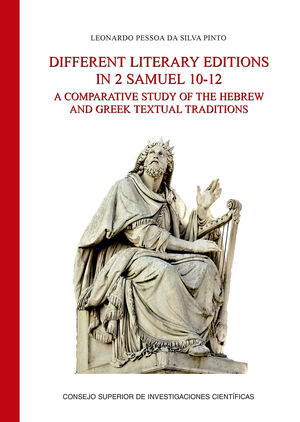 This monograph discusses the possibility of different literary editions in the Masoretic Text and the Old Greek of 2 Samuel 10-12 by combining the methods of textual criticism and narrative analysis. The study includes an assessment of the textual development whenever signs of a different edition are detected. The text-critical study and the narrative analysis of 2 Sam 10-12 have been kept in distinct sections of the work for the convenience of the reader more interested in one aspect or the other. The narratives of the original Greek and the Masoretic Text can only be compared if the Old Greek in 2 Sam 10-12 is first attained. However, the OG of those chapters can be established only through the comparison between the Lucianic text and the so-called ?a??e text. This comparison requires the study of the translational or recensional features of both textual traditions, a subject treated in detail in the monograph.

In the sections devoted to textual criticism the testimony of 4QSama and the witnesses to the Vetus Latina have received much attention. The Targum, the Peshi?ta, Flavius Josephus and the Greek Chronicles have also been taken into account. This monograph discusses instances where MT's version is older than OG's account, but also cases when the OG is to be preferred. Not rarely, cases were encountered where it was not possible to decide whether it is the OG or MT that preserved the oldest reading.

This work also shows that reading the books of Samuel as a polyglot text is a fruitful exercise for biblical research. The textual traditions discussed were treated both for their value for textual criticism and as texts worth reading on their own, with attention to their specific narrative outlook.