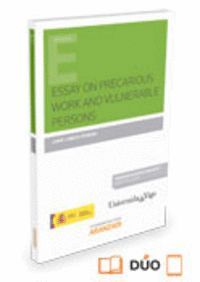 The trend towards more precariousness in labour relations is a common feature of all the regions of the world in the globalized economy. This book tries to look for the circumstances that have prompted this trend. Among the main problems concerned, the growth of informality, the difficulties faced by migrant groups, the increase of fixed term contracts, the development of private employment agencies, the incidence of telework or the weakness of self-employees are typical features of the vast majority of labour markets. As a class affected by some of these circumstances, domestic workers are exposed to different abuses from their employers, employment agencies and from the host countries? legislation on immigration. Also the book deals with the concept of vulnerability which characterizes some groups like disabled workers, racial minorities or ageing employees . Women must be recognized as vulnerable workers as well due to their difficulties and barriers to share with men an egalitarian labour market.
All those problems described, the book criticizes the shy and too prudent approach of international legislation and the lack of compromise of developed countries in human rights conventions. Also the hypocrisy of the European Union institutions and their informal bodies prompting depressed countries to legislate against vulnerable persons.