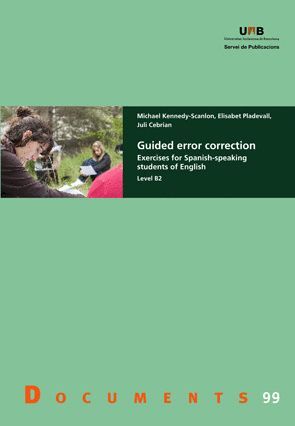 This book is the result of years of experience teaching English to Spanish undergraduates studying for a degree in English Language and Literature. The focus of the book reflects the assumption that a large majority of the mistakes made by advanced-level learners are the result of interference from their native language. The approach adopted in this book is based on the idea that correcting one?s own mistakes involves two separate operations, namely, first recognising the error as such and then providing the correction for it. In the first two thirds of the book, errors are explicitly identified for the learner, whose task is simply to correct the errors. In the final third, however, learners must carry out both operations. It is this two-step approach that the term ?guided error correction? tries to reflect. In order to provide sufficient practice, each of the errors ?all characteristic of Spanish-speakers learning English? occurs on six separate occasions in the book. In addition, the book includes a section of brief explanatory notes at the back of the book where each of the errors is explained, with Spanish translations provided to enhance comprehension of nuances in meaning. These notes are cross-referenced with each error in the exercises for handy referral, but at the same time represent in themselves a compact reference source for common errors. This book will be useful for upper intermediate to advanced-level Spanish-speaking learners of English in any context, though it has been designed primarily not for systematic consecutive classroom use but rather as a series of self-correcting one-page exercises that can be pursued sporadically at the learner?s convenience. This book is part of a series of three books.

Michael Kennedy-Scanlon has an MA in Teaching English as a Foreign Language from the School for International Training in Vermont, USA. Since coming to Spain in 1981, he has taught English for the Health Sciences, English for Professional Purposes, and Intercultural Communication in a variety of university contexts. He also does proofreading, author?s editing and occasional translations of academic texts into English. Elisabet Pladevall has an MA in Linguistics from University College London and a PhD in English Philology from Universitat AutÚnoma de Barcelona, where she is currently a lecturer in English language and linguistics. Her areas of specialisation include Second Language Acquisition in immersion and instruction contexts and more recently in CLIL contexts in primary schools. She has also taught English as a foreign language and Business English at several institutions. Juli Cebrian holds a PhD in Linguistics from the University of Toronto, Canada, and a BA in English Philology from the University of Barcelona. He is professor agregat of English Language and Linguistics at the UAB and has taught English and Spanish as foreign languages and English for Special Purposes at several institutions. His research focuses on language learning, and specifically on the acquisition of English as a foreign language.