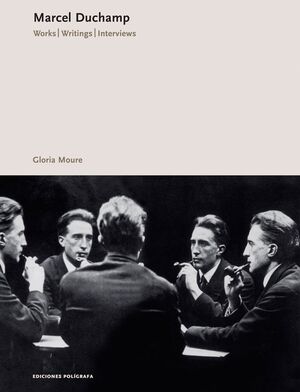 A central figure in twentieth-century art, the influence of Marcel Duchamp (1887-1968) was crucial to the development of Surrealism, Dada and Conceptual Art. Brother of the artist Raymond Duchamp-Villon and half brother of the painter Jacques Villon, Duchamp began to paint in 1908. In 1912, he painted the definitive version of Nude Descending a Staircase; this was shown at the Salon de la Section d´Or of that same year and subsequently created great controversy at the Armory Show in New York in 1913. On this time, he had abandoned traditional painting and drawing for various experimental forms, including mechanical drawings, studies, and notations that would be incorporated in a major work, The Bride Stripped Bare by Her Bachelors, Even (1915-1923; also known as The Large Glass). In 1914, Duchamp introduced his readymades--common objects, sometimes altered, presented as works of art--which had a revolutionary impact upon many painters and sculptors.

This book--edited by Gloria Moure--deals with his many-faceted activities and the radical positions he maintained vis-à-vis his contemporaries. It goes on to describe and analyze his work as a whole, including his key writings and interviews.