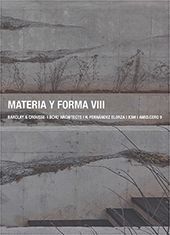 The eighth architectural conference "MATERIA Y FORMA", organised by Cátedra Blanca Valencia, will take place on the 21st and 22nd March 2109 in the Lecture Room of the School of Architecture of Universitat Politècnica de València. MYF,together with the International Congress of White Architecture [CIAB], represent an international meeting point for the architectural debate related to white or coloured. exposed concrete. Thanks to these events organized by the Cátedra Blanca Valencia that began 15 years ago, there is a forum for debate and exchange of experiences through the best concrete buildings made in recent years. In this way, it brings future professionals in architecture to the business world in general, and to the concrete sector in particular. In this edition, architects from Spain,Peru and Korea will show us the latest projects carried out in exposed concrete. The result of each of the conferences is an international architecture publication, which increases the publications created by the Cátedra Blanca. The set of all publications are widely disseminated in university libraries and specialized bookstores and make up a catalogue of specific architecture of exposed concrete, a material that today is considered of great nobility in architecture.