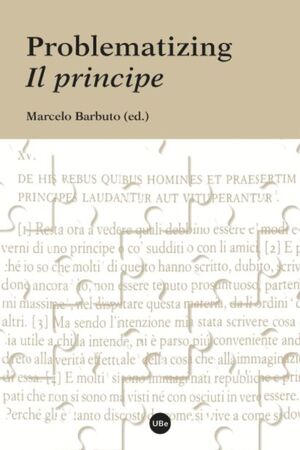 Whilst he was writing "De principatibu"s, was Machiavelli really as out of touch with the Florentine politico-institutional world as his letter of December 1513 claims? Who read Il principe prior to its publication, and how? Why did the philosopher Agostino Nifo, one of the major proponents of renaissance Averroism, plagiarize it? To what extent is the Machiavellian "principato civile" comprehensible only by way of its Medicean and Florentine affiliation? Did the young Lorenzo de? Medici's political programme seek to eliminate the Roman church? What politico-cultural stance is hidden behind certain political terms from the humanist tradition that Machiavelli revisited in Il principe? To what extent was the Machiavellian relationship between animality and humanity, simulation and dissimulation, influenced by Leonardo da Vinci?s oeuvre? And, finally, what are the questions that remain open in Il principe? This compilation offers some possible answers to these questions, thus providing new critical tools for the study of Niccolò Machiavelli's "Il principe".