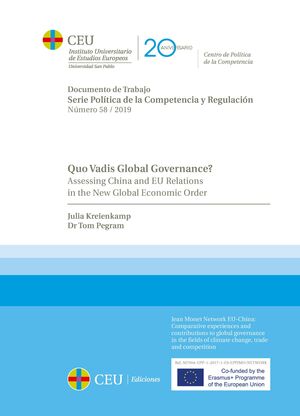 This study offers a valuable sightline onto areas of innovation for a new generation of global governance scholarship. In particular, by framing key organisations and initiatives as sites of intervention and contestation, scholars can shed light on the endogenous causes of conflicts and struggles as functions of international organisations themselves, as opposed to seeing global politics as an epiphenomenon of struggles between independent units. This is evidenced by two key domains of economic relations between China and the EU: (1) China and the EU in the WTO and (2) the Belt and Road Initiative and Chinese foreign direct investment (FDI) in Europe. Puncturing the cooperation bias which permeated much first generation global governance scholarship is an important first step to arriving at an appreciation of the politics of making global governance and the distributive struggles involved, jettisoning linear accounts of changing global power dynamics. It also invites observers to take seriously conflict over norms, values, ideas and identities  issues that global governance scholars have too often shied away from. Finally, such an effort can shed light on some of the practical challenges of global policy-making and delivery in the 21st century and the pressing question of what works?