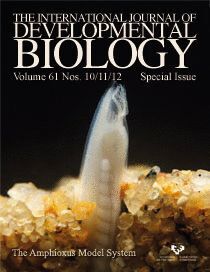 The amphioxus, or lancelet, is a fish-like marine chordate which is considered to be an archetypal vertebrate form. Although specialized tunicates are closer relatives to chordates, amphioxus represents the best living outgroup proxy for the study of the evolution and development of vertebrates. It spends most of its life burrowed in the ocean floor, exposing only the front part of its body. It collects its food by filtering the surrounding water through its mouth, which is protected by conspicuous oral cirri stiffened by a cartilaginous skeleton. The illustrated amphioxus belongs to the species Branchiostoma floridae, the Florida amphioxus, which is the species that is most commonly used as a model in experimental biology.