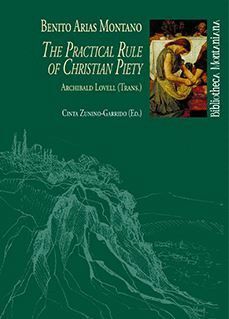 In 1575 Christopher Plantin sent to press Arias Montano's Dictatum Christianum sive communes et aptae disciplinorum Christi omnium partes. It is presumed that shortly after the publication of the Latin original the treatise was translated into French, Dutch, and Italian, yet, though there is written evidence of the French impression, no copy of this translation nor of the Italian or Dutch are extant. During years the only known surviving translation of the Dictatum was the one rendered into Spanish by Montano's disciple Pedro de Valencia thirty years after the publication of the original. These circumstances certainly underline the exceptionality of the 1685 English translation of the Dictatum Christianum, which has remained unknown to scholars until very recently, and to which its translator, Archibald Lovell, gave the title of The Practical Rule of Christian Piety: Containing the Summ of the Whole Duty of a True Disciple of Christ.

Printed in London in 1685 by Joseph Hindmarsh, this unique translation of The Practical Rule will surely prove particularly interesting to scholars who study Spanish and English Humanism and early modern spirituality, philosophy, and culture. With this new edition of the text, our aim is to make it known to modern researchers, and to explore the peculiarities of the translation and of the ideological backdrop against which Lovell Englished Montano's Dictatum Christianum almost a century after the death of the Spanish Hebraist, and in a country where Anglicanism had become the established official creed in stern opposition to Catholicism.