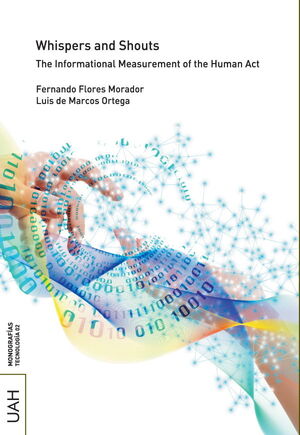 WHISPERS AND SHOUTS. THE INFORMATIONAL MEASUREMENT OF THE HUMAN ACT (Libro en papel)

This second volume completes and updates the theory of the study initiated in The Informational Foundation of the Human Act (2018) by developing a theory for the measurement of the act. Firstly, we will study the nonpolar (monistic) approach of acting, accepting that it does not distinguish between matter and idea, and instead, it is founded on the dichotomy between sizes and dimensions. This perspective allows us to measure the SHOUT (in p-bits). SHOUTS refer to the impact of human act upon the world. The SHOUT can appear directly as in "driving" or "hammering," but also indirectly embedded in items like a "car" or a "hammer." Secondly, we have the bipolar approach, which is dualistic, in the sense that it distinguishes matter from idea and raises an insurmountable barrier between them. In a bipolar perspective, we found WHISPERS (?-bits), which can be whatever we want or whatever we find empirically as a content of the "mind." WHISPERS become conscious through language and can be used in communication as "words," "sentences," and "texts." Thirdly, we introduce a technical approach that combines the nonpolar with the bipolar approaches, generating an eclectic perspective that opens the measurement of two other new different scenarios: the CRUNCH and the NOISE (?). The final part of the book frames automatic acting and rational-useful acts, including destructive acts and future acting, in the taxonomy of measurement. The instruments and units of measurement depend on the scenario and point of view of the analysis. The study is complemented with multiple examples that demonstrate the theory of measurement.